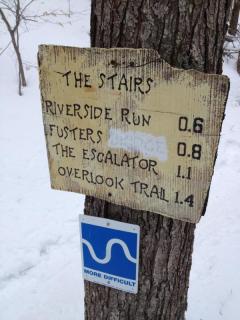 This winter I decided to get my butt out there and try some snowshoe running and racing.  Boy, am I glad I did.  The whole point of this blog is to share my love of the outdoors and trying new adventures with all of you… and this was just another step along that journey.  Needless to say, I’m loving it.  But enough about that… on to the race report!

Saturday I took on the Peak Races snowshoe half marathon, in Pittsfield, Vermont. What an AWESOME challenge. I loved every snowy second of it, from the winding, never-ending quad-and-lung-burning climbs to the slippery, twisty descents.  This was the farthest I have every run in snowshoes. I went into this with no expectations whatsoever.  Keep on moving forward until I finish, and keep smiling.  That was the goal.  I crushed that goal :).

I must confess, I signed up for this race through a LivingSocial deal.  It was on sale… and I am a bargain shopper.  Seriously – slap a clearance tag on something, and I MUST have it.  So, I clicked that lil’ purchase button and signed myself up.  Then began peer pressuring people to join me.  It worked… I think it’s safe to say we all had a blast!  Now, I’m not always the smartest… initially I signed up for the full marathon, but was wisely talked down from that and am sooooooooooooo glad I only did the half.  It was a challenge, and most importantly I will recover quickly and get on with my training for the good stuff ahead.

The race was held at Amee Farm in Pittsfield, VT.  It was a 6.5 mile loop (according to my garmin 6 mile loops – word from others is that they got around 6 miles as well), with about 1200 feet of elevation gain per lap.  Here is my garmin file, for your viewing pleasure.
http://connect.garmin.com:80/activity/embed/279980354
The race started out onto the Green Mountain Trails, across the street from the Amee Farm Lodge.  Beautiful even on a gray, snow-covered day… These trails must be amazing to run or mountain bike during the Summer and Fall – we will definitely be back!

The morning went smoothly, and the half marathon race went off at 8:30 AM, (marathon at 8, 10k at 9).  The start was a little tricky, we started out in front of the barn on the dirt road headed into the parking lot, but almost immediately funneled into singletrack, with deep snow on the sides that made it hard to pass. I got stuck behind some people here, but was able to get around most of them fairly quickly.  I had no clue where I was in relation to the pack, but just started running steadily and felt strong. We had to cross a narrow bridge built across the river to get into the woods and start the lap – luckily I got there with very little traffic and had uneventful crossings 🙂

The first 3 miles of the loop are pretty much straight uphill.  It was a combination of winding switchbacks and steep climbs that seemed to go on…. and on….. and on….. and…. ok, you get the point.   I surprised myself by keeping a pretty steady running pace heading up the hills.  I’m really starting to see the gains that I’m making through my strength training. The work I have been doing has changed the way that I approach running and racing tremendously.  Thank you, thank you, thank you to Coach Al Lyman for your guidance and motivation to get me to this point!  Nowhere was  this more evident than on these climbs!  Instead of trudging up miserably, I was able to push through and keep running when the going got tough. The core strengthening work I have done kept me stable and upright, instead of a bent over, hunched up mess. I found myself feeling like I was conquering the hills instead of surviving them.  Yes, my legs were tired and my lungs were burning, but in a “I’m strong and I can DO this” kind of way, not in a “oh dear Lord make it stop” kind of way.  The trail was packed down singletrack with knee deep snow on both sides. It was absolutely beautiful running. My favorite part was a section of winding switchbacks that gradually climbed up toward the summit of the ridgeline.  It was a dark, dense pine stand called “labyrinth”.  Pine forests are always my favorite to run through -they just seem like another world!   After winding our way to the top of the ridgeline (complete with beautiful views of the surrounding snow-covered peaks), we rounded a corner with a small hut  and started the descent.  This was VERY interesting for me, because I haven’t done a whole lot of technical snowshoe running. Some of the descents were pretty slippery and steep, with lots of off-camber turns and switchbacks.  I actually found that the descending was easier on the second lap, once I got my balance down and got into the groove.  I also managed to kick myself in the ankle a few times with my snowshoes, ouch!!  I was seeing stars!  (Note to self – you have giant things strapped to your feet.  watch your stride.  the end.)  There were over 300 people out on the trails, doing a variety of distances.   Many were walking, but everyone was very nice and stepped off the packed snow to let the runners pass.  I only had to yell to one girl who had her headphones up too high to hear me, but other than that it was smooth sailing (well, and one girl gave me the “I’m not letting you pass” look on our way up the hill.  Then she tripped herself and fell down.  oops.)  Everyone was really friendly, and we all cheered each other on.  Just what a trail race should be!
The first lap was very steady, I felt great.  According to my garmin, I ran it in around 1:30 or so – very respectable!  On the second lap I felt nice and strong and steady.  I had to do some hiking on the hills (and a little trudging.  and a couple of fall on my face-es.  totally fine), but it seemed like I got to the top of the ridgeline before I knew it! I was running along with a really nice guy who has done some of the other Peak races (seriously.  crazy.  who does the Death Race on purpose??!!??), keeping up a good pace and feeling great.  I felt like I ran most of the downhills pretty well – my tired legs turned the steep stuff into more of a sled-like scramble, but I managed to stay in one piece (Though I was literally hanging on to the trees to get down some parts.  ridiculous.)  With something like one mile to go, a girl ran up hard behind me on my heels, and I let her pass. I had no idea if she was even in my race, but figured with the pace she was keeping up, she must be.  I fought off the urge to chase her down, since I was pretty sure that would end badly for me on the steep, windy descents.  I have a long season to look forward to, and I wasn’t willing to risk ending it with an injury over one place in a snowshoe race I was doing for fun (besides… I was ahead of her for all of the climbing.  Yeah!  I’ll take that any day).  I kept my pace steady and pushed myself once I got onto the flats, and up the hill into the finish.
The race was an amazing experience – I had a blast, and felt great!!  According to the Garmin, I finished in around 3 hours.  They are having some technical difficulties with the race results, so I’m not sure what my official time and place will be, but that’s not important.  I ran well, felt strong, and had tons of fun doing it.
Here’s a little breakdown of some race stats…..

Overall, this was a stellar weekend, and a great race.  The Peak  Races crew put together a very fun and challenging course.  Yes, there were (are?) some issues with the results, which hopefully they are able to fix.  But for me, that’s not why I was there.  I’m curious to see how I did against the rest of the field, but I’m not too worried about it. I know I felt great and put in a great effort, and that’s what counts.

Big time congrats to Nicole for giving in to peer pressure (that peer pressure is a bitch!) and doing this as her first ever snowshoe race.  Bad. Ass. Broad.  (Check out her blog – it is amazing.  Hilarious.  Witty.  better than mine 😉 ).  Also great work to Gary for a solid half marathon, and congrats to the ever speedy Ryan and Kristina for winning the men’s and women’s marathon!  (Seriously – whatever is in their water, I want a sip.  Or two. :-))

Also, major thank you to my partner in crime and champion photographer and spectator, Anthony for supplying us with lots of pics and cheers 🙂  And huge thanks to Coach Al for helping me to realize that I can be a strong, bad-ass, I-eat-mountains-for-breakfast (well, hills anyway) kind of a chick.  I will continue to squat and plank my way to bigger and better strength and speed.  And I will also continue to expertly color coordinate my running outfits while doing this. Because that?  is who I am.


I’ll also throw in a little plug for the Trailside Inn in VT.  We stayed here (sister inn to the Amee lodge).  Rustic, super cute inn.  Very friendly staff, reasonable prices, great launching point for adventures in the Killington area.  We will definitely be back.  Look em’ up, and head north for some fun!!  Another plug for McGrath’s Irish Pub at the Inn at Long Trail.  Obviously I am going to go anywhere that has “Irish Pub” and “Long Trail” in the name.  Two of my favorite things!!  (well, 3 – if you count Long Trail the beer, and Long Trail the trail.  but I digress).  Great food, great atmosphere, great time unwinding after the race.  Love me some Vermont!
I hope everyone had a great weekend… get out there and have some fun!! 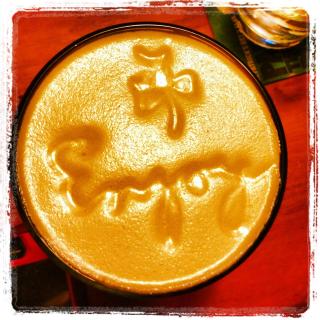 Crossing finish lines is pretty dope. 10/10 would recommend. Thanks for the 📷 @bikeandrun ! 🤩
If something is pretty, stop and take it all in. 🌲💚. And take a picture that never does it justice 🤷🏼‍♀️
🪨🪨🪨🌿☀️.... we sure do have lots of rocks around here
Can you spot me?? 🏃🏼‍♀️😁
She has her mother’s eyes... and personality 😝
There was a whole lot of 🌲 🪨 😁 and ☀️ today. Thanks @lizsurfsdirt for the tour of Bigelow Hollow. I have a new favorite place (until I find the next favorite 🌿)