It’s no secret that we have a bit of a “thing” for camper vans.  And by thing I mean total obsession with the damn things.  Snapping shots of them wherever we go.  Spending way too much time longingly looking at ebay, craigslist, Pinterest, Instagram…. you name it, we will find the van of our dreams on it.

So, what’s a van loving couple to do when you are.  In L-O-V-E with the idea of van camping but aren’t quite ready to pull the trigger on a van of your own?  Find a sweet rental and hit the road!  We decided on a California road trip as our first foray into the camper van business, and took a 2 week trip from San Francisco to Yosemite, Lake Tahoe, and the northern coast.  A full write up on the route itself is coming;  but first, let’s talk about the van!!

I did a LOT of research before booking our campervan rental.   You can see my comparison spreadsheet here.

Ultimately, we settled on the Escape Campervan after taking into account their location, size of the van, cost, included equipment, and reviews.  While I’m sure the other rentals would have provided a pretty kick-ass experience, we were very happy with our choice!

The van we rented was a Ford E150 (15 passenger van size).  It was modified to a campervan layout that included a full size bed inside (cushioned bench seats fold down flat to create the bed), an inside table (removable for “bed mode”), storage boxes beneath the seats, and a kitchen setup accessed by opening the back doors.  Here are some stock photos from their website outlining the layout, as well as some shots of the exterior and interior of our cute lil’ van “Quilt”. 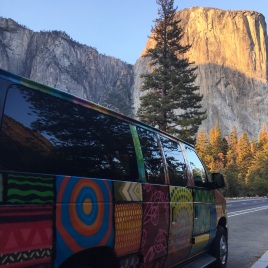 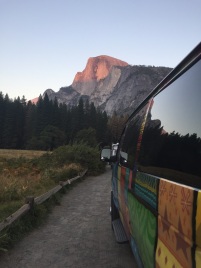 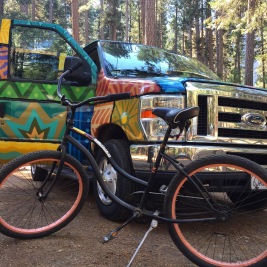 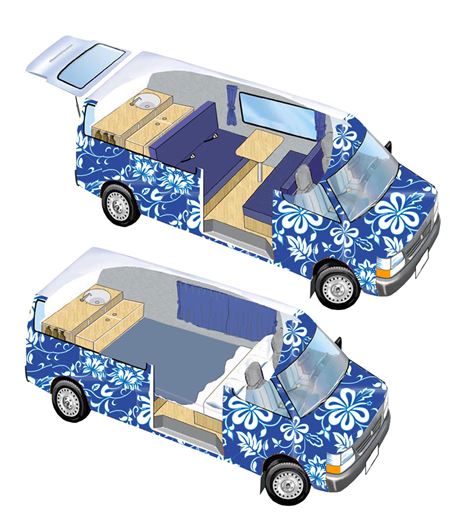 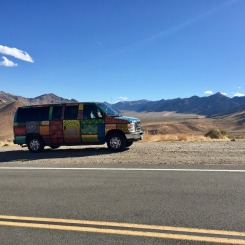 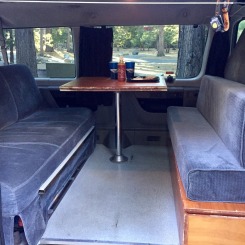 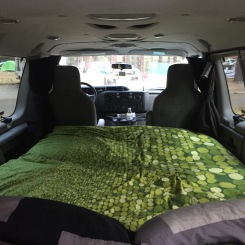 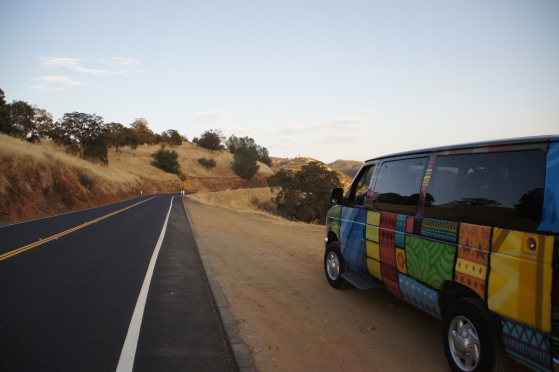 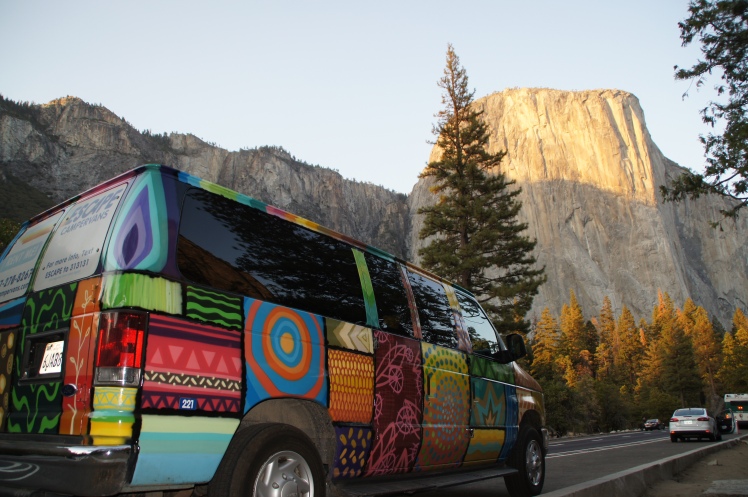 The kitchen was a sweet setup in the back of the van.  You can only access it by opening the back doors, which gives you your cooking space. 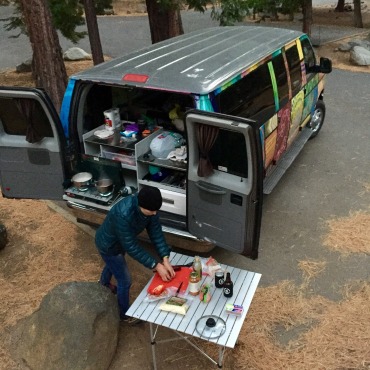 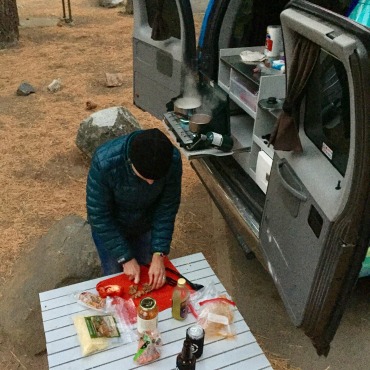 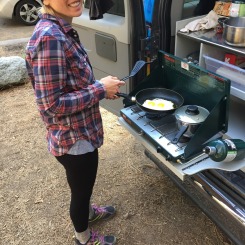 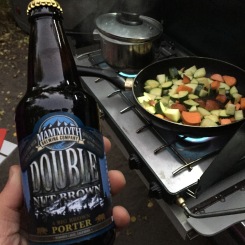 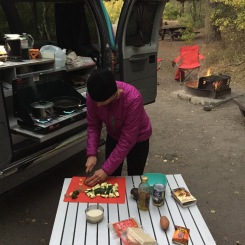 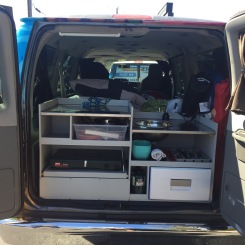 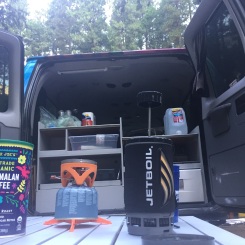 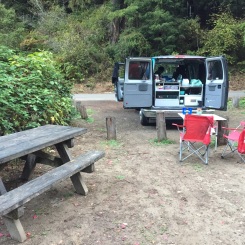 So, Whaddya get in that kitchen setup?… 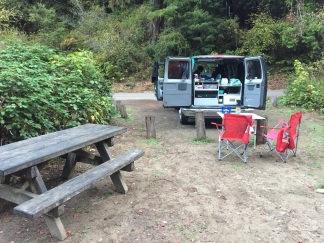 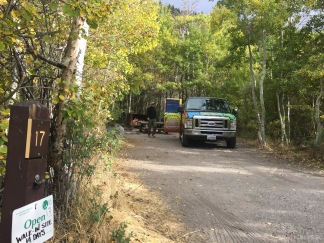 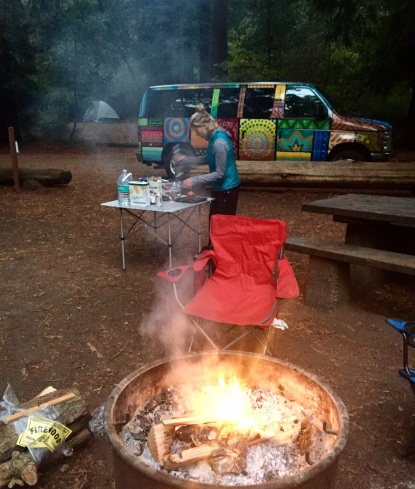 The van was small enough to fit into tent sites, which made it very easy to find places to stay.  There is a lot of dispersed camping available in National Forest lands but we opted to stay in established tent camping campgrounds for our first trip like this, so we would have access to campfires (not allowed in most of the drought-stricken areas out west unless you are in a campground) as well as access to bathrooms and water sources.  It cost a bit more but made our logistics easier since we knew where we would be staying each night. 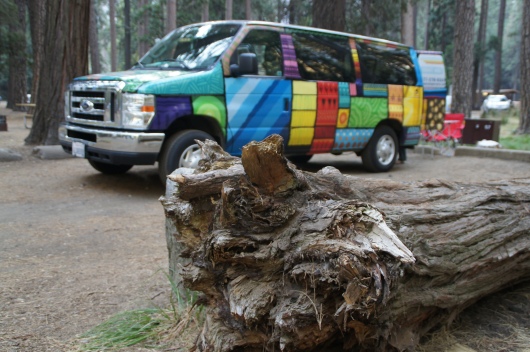 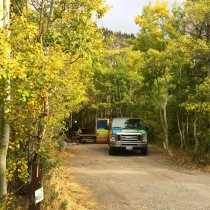 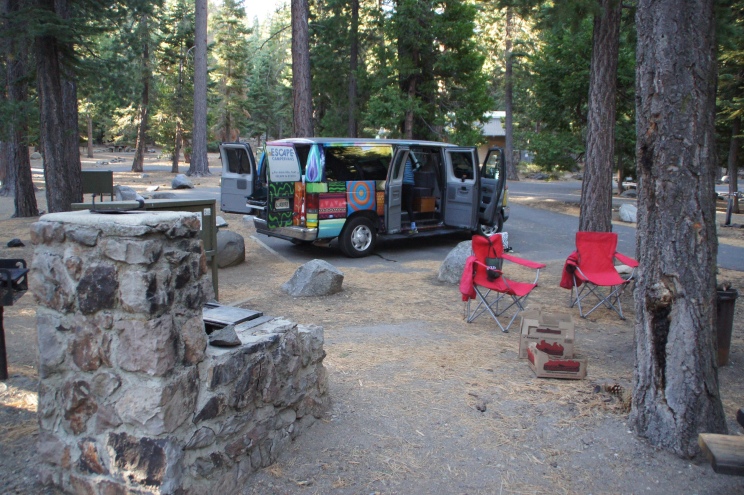 The bed was surprisingly comfortable.  Cushions were thick and everything folded completely flat.  The only issue we had with this was that the front of the bed rested on two wooden storage boxes.  The top of one would shift a little and caused the bed to shift a little bit.  Not a major deal but you had to remember not to lean directly on that area when getting in and out of the van, otherwise it would clunk out of place and send you rolling.

*pro tip – make SURE you are parked as level as possible.  Otherwise you will end up with all of your blood in your head or feet.  Not that comfy*

Most everything you need is included in the rental, which is one of the reasons we went with Escape.  They don’t nickel and dime you for bedding, kitchen utensils, etc.  It’s all part of the deal.  You can see their website here for info about what’s included and what can be added on.

We opted to add a side table and the awning (a little easy-up style tent).  The table was VERY handy for food prep while we were cooking and eating.  We didn’t have any rain since we were in a drought affected area much of the time but if we did the easy up tent would have been key – put it over the side door to give yourself a dry place to step out to, or over your table and chairs for dinner time.

What did we love?

Pretty much EVERYTHING!  It was easy to drive and park.  The bed was comfortable.  The painted designs on the vans (all are painted with a variety of themes by local artists) are super fun and jazzy.  We saved a ton of money by loading up with groceries at a Trader Joe’s along our route and cooking almost all of our meals.

We spent two weeks being dirty, happy campers in our Escape Campervan.  We hiked and drove through some of the most beautiful places I have ever seen.  And never once did we want to kill each other, despite co-existing in a tiny square on wheels.  (Ok that might be a lie.  There was probably like one or two moments.  Not much though, I swear). 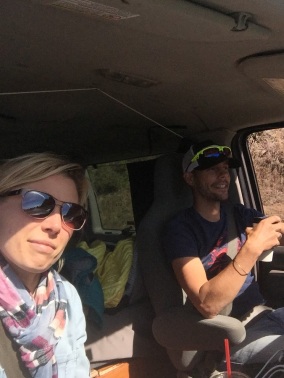 As a matter of fact, we loved the damn thing so much that we just booked another trip in one!!  (Thank you Groupon for the sweet deal!).  Utah and Colorado, here we come!!!!!

Not everyone can (or is willing to) sell all of their belongings and live a nomadic life in a van.  Or has the funds to have a van of their own at their disposal for epic camping trips and sweet Instagram shots.  For the rest of us, a rental gives a taste of the vanlust life…. and a safe return to our cozy house with indoor plumbing and regular showers.  Try it, you won’t regret it!  (Or maybe you will.  Just don’t blame me because you don’t know what fun is). 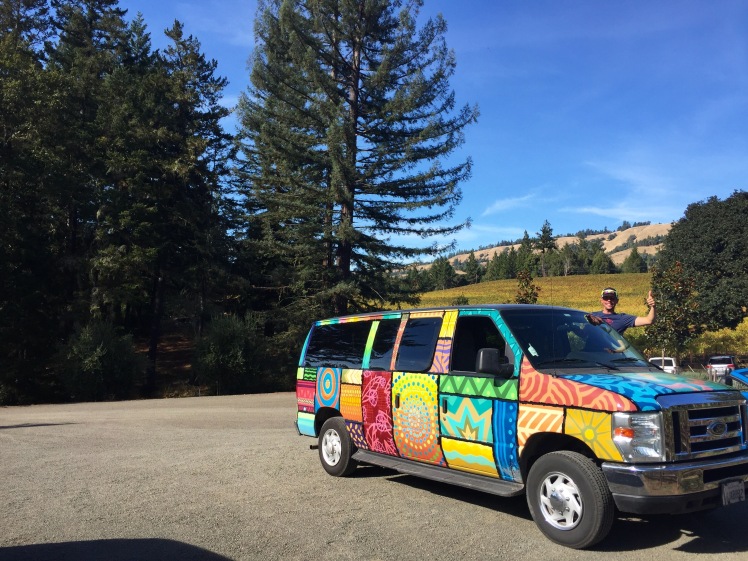